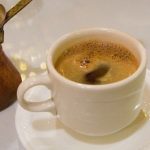 Maybe it’s the ingredients, or the leisurely way people enjoy it, but Greek coffee, which is boiled and sipped when the residue settles at the bottom of the cup, may hold the key to the long life enjoyed by the inhabitants on the eastern Aegean island of Icaria, an Athens University Medical School study has found.
Led by Dr. Gerasimos Siasos, the study was prompted by data suggesting that while only 0.1 percent of Europeans live to be 90 and older, on the island of Icaria, the figure was 10 times higher, about 1 percent – one of the highest longevity rates anywhere in the world.
According to the study, which was published in the journal Vascular Medicine, “boiled Greek type of coffee, which is rich in polyphenols and antioxidants and contains only a moderate amount of caffeine, seems to gather benefits compared to other coffee beverages,” United Press International quoted Siasos as saying in a statement.
Siasos’s team screened 71 men and 71 women from the island’s permanent over-65 population of 673, checking for high blood pressure, diabetes and other medical conditions and questioning them on their health, lifestyles and coffee drinking – 87 percent said they drink a cup of Greek coffee every day.