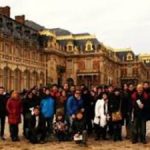 Third-grade Lyceum Greek students and teachers who accompanied them on a five-day school trip to Prague were rousted and allegedly assaulted by police, according to reports from Greek websites, eTeachers.gr and creteplus.gr.

The students, all from senior high schools in Crete, of Anogia, Perama, Panormou, Agioi Deka, Tzermiades and Agios Nikolaos, as well as from Thessaloniki, were staying at the Albion Hotel.

On March 12, the hotel-manager reportedly upset that the students were rowdy at 2 a.m., called the police. The Greeks said the police entered the hotel, insulted and beat them and made a teacher stand against the wall for a body search.

One student said he was bruised, handcuffed and taken to the police station without a teacher escorting him. He was released at dawn, after it was found he was a minor.

Impressed by the entrepreneurial environment in Greece, US giant Amazon announced that they will soon open their first office in Athens.
Greek News

The first image of a black hole, captured in 2019 by Greek astronomer Dimitrios Psaltis, has revealed more support for Einstein's theory of general relativity.
Greece