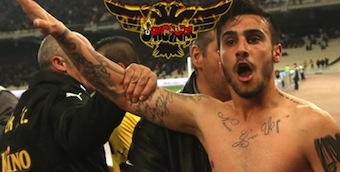 A soccer player for the Greek team AEK Athens, midfielder Giorgos Katidis, was banned for life from playing on all national teams by Greece’s soccer federation EPO on March 17, a day after he gave a Nazi salute to supporters to celebrate his winning goal in a 2-1 victory over lowly Veria. He may still be allowed to play for his team, however.
Katidis, 20, a former captain of Greece’s under-19 team, will not be allowed to play anymore, the federation said.
The ban came not long after Prime Minister Antonis Samaras, after a long silence, said his government would begin cracking down on neo-Nazi groups. The neo-Nazi Golden Dawn party has 18 seats in Parliament and is rising in the polls on the back of an anti-immigrant, anti-Semitic, anti-gay, extreme nationalist, ultra-religious platform.
“The player’s action to salute spectators in a Nazi manner is a severe provocation, insults all the victims of Nazi bestiality and injures the deeply pacifist and human character of the game,” EPO said in statement.
Katidis was heavily criticized by political parties and fans on Twitter and Facebook following the incident at the Athens Olympic Stadium. The ban came on the 70th anniversary of the Greek Jew deportations in Nazi concentration camps in WWII. AEK officials want Katidis to explain himself and will then decide his future at a board meeting next week.
Katidis denied he gave a Nazi salute. “I am not a fascist and would not have done it if I had known what it meant,” Katidis said on his Twitter account, pleading ignorance about what the salute meant although it has been given by Golden Dawn members and gained wide publicity in the country.
The player said he was simply pointing at Michalis Pavlis in the stands to dedicate the goal to his team mate as he continues to fight health problems. AEK’s German coach Ewald Lienen backed Katidis. “He is a young kid who does not have any political ideas. He most likely saw such a salute on the Internet or somewhere else and did it without knowing what it means,” he said.
AEK is languishing in 10th place in the table with 29 points from 26 games. Veria is fourth from last. Katidis joined the club from Aris last year after impressing in Greece’s run to the final of the European Under-19 Championship where it lost to Spain.
The Democratic Left, a junior partner in Greece’s coalition government, issued a statement condemning Katidis’s salute. It questioned whether the player was aware that AEK was a club founded by refugees from Istanbul, or Constantinople as it wasonce.
Golden Dawn has defended the Nazi salute, which has been performed in public by some of its MPs, including leader Nikos Michaloliakos, by claiming that it is an ancient Greek greeting.
Watch the video showing Katidis scoring a goal and then making with the heavily criticized salute: