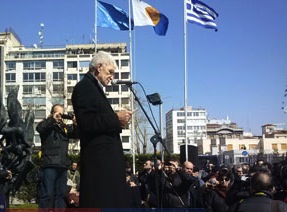 In a somber ceremony commemorating a dark day in Greek history, Jewish residents of Thessaloniki gathered on March 16 to note the 70th anniversary of the roundup and deportation of the northern Greek city’s Jews to Nazi extermination camps in World War II.
Several hundred people gathered at the city’s Eleftherias (Freedom) Square, where the first batch of Jews were rounded up by the occupying German forces on March 15, 1943. The crowd held a moment of silence and then marched to the city’s old railway station, where the first trains departed for the Auschwitz-Birkenau concentration camp complex. A short ceremony was held at the station and flowers laid on the tracks.
Speakers included the city’s mayor, Yiannis Boutaris, and Holocaust survivors, the Associated Press reported. “The commemoration is an honor for the city of Thessaloniki. But some people look upon this era nostalgically and are bringing back the old Nazi symbols,” said David Saltiel, leader of the city’s Jewish community.
He was referring to the emergence of the extreme right wing Golden Dawn, a party with neo-Nazi roots that swept into Parliament for the first time last June on an anti-immigrant platform and has been criticized as being anti-Semitic. In 1943, some 2,800 Greek Jews were herded onto trains and sent to the concentration camp, although a number of Greeks risked their own lives to save many during the occupation.
“We were packed 80 to a train … when we arrived, they sent a number straight to the crematoriums and kept some of us for work. We were beaten often by the guards,” recalled Holocaust survivor Moshe Haelion, the AP reported.
Another survivor of the camps, Zana Santicario-Saatsoglou, described how, for many years, she was unable to tell her story. “My children used to ask me what that number on my arm was,” she said, referring to the identification number tattooed on Auschwitz-Birkenau prisoners. “I told them it was my old phone number in Thessaloniki.”
By August 1943, some 46,091 Jews had been deported to Auschwitz-Birkenau. Of those, 1,950 survived. Fewer than 5,000 of the 80,000 Jews living in Greece survived. The majority, after returning from the camps, emigrated to Israel. Today, the Jewish community in Thessaloniki, which, until the early 20th Century formed a slight majority of the city’s inhabitants, numbers fewer than 1,000.
The Jews of Thessaloniki were mostly Sephardic Jews, who emigrated after 1492 to escape persecution from Spain which, in that year, had driven the Arabs out of the southern Iberian Peninsula.