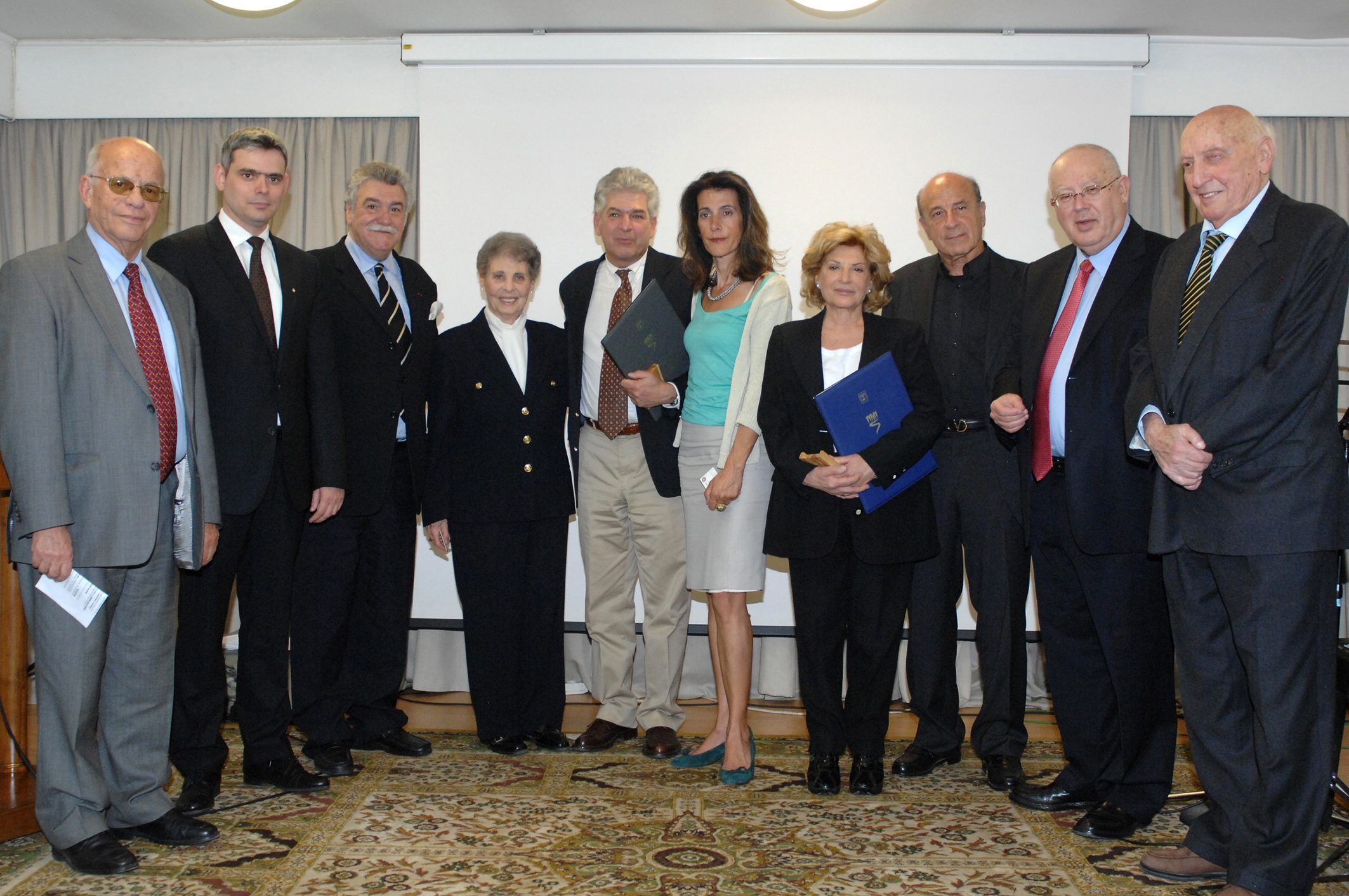 The Embassy of Israel and the Central Board of Greek Jewish Communities (KISE) held a special ceremony honoring three exceptional stories of courage and self- sacrifice. The Ambassador of Israel to Greece, Arye Mekel, and the President of KISE, David Saltiel, presented the medals and title of Righteous among the Nations, to three Greek Christians who rescued persecuted Jewish compatriots during the Nazi occupation. The Greek Deputy Minister of Justice, Kostas Karagounis, delivered an address at the event held March 12.
The events was also attended by: MPs Kyriakos Gerontopoulos, President of the Greek – Israeli Friendship Committee of the Hellenic Parliament, Stavros Kontonis (SYRIZA) also a member of the committee, the President of the Jewish Community of Athens, Benjamin Albalas, and the Ambassadors of Poland, Hungary, Bulgaria and Canada, which head the International Task Force for Holocaust Remembrance (ITF).
Lela Karagianni, the legendary woman of the Greek Resistance during World War II, was declared Righteous among the Nations for rescuing the family of Solomon Cohen in 1944. In April of that year, Karagianni provided shelter to Solomon Cohen, his wife Regina and their young daughter Shelly, even though the Nazis suspected her of being a member of the Resistance.  She also made sure the family was transported to a safe refuge when circumstances became even more perilous. A short time later, Karagianni was arrested and executed by the Nazis, just prior to the liberation of Athens. Her award was received by her grandson, Alexandros Papagiannis.
Giorgos and Polymnia Theodorakis were honored for rescuing Beatrice Matalon. In September 1943, the Theodorakis family provided shelter to Beatrice in their home in Athens during the Nazi occupation. The Theodorakis couple did so even though they had a two-year-old daughter and Polymnia was pregnant with their second child. Giorgos and Polymnia did not waver in their support for Beatrice even when the Nazis came knocking on their door. Their awards were received by their daughter, Lydia Theodoraki-Dimaki.
The title of Righteous among the Nations is bestowed by Yad Vashem, the Museum and Institute established in Jerusalem by the State of Israel in memory of the six million victims of the Holocaust. It is given to individuals who risked their lives to save Jews during World War II. Presenting the award requires an extensive investigation by Yad Vashem and approval by the Israeli High Court.  It is considered one of the highest honors that can be bestowed by the State of Israel.
Over 300 Greek “Righteous” have been honored until now. They include the late Archbishop of Greece during the Nazi occupation, Damaskinos, the Chief of Police in German-occupied Greece, Angelos Evert, the former Mayor of the island of Zakynthos, Loukas Karrer, the late Metropolitans of Zakynthos and Dimitriada, Chrysostomos and Ioakim respectively, as well as many other unsung heroes of World War II. The event included a presentation of a video by Filmmaker, Vassilis Loules, documenting the resistance activities of Lela Karagianni and musical accompaniment.
The Ambassador of Israel, Arye Mekel referred to the work of Yad Vashem, saying that the Jewish people have not forgotten those who risked their lives to save Jews during the Holocaust including 310 brave “Righteous” Greeks. He added that it is amazing that even today, 70 years later, Yad Vashem continues to discover and honor such heroes. The President of KISE, David Saltiel, referred to the terrible tragedy of Greek Jewry which lost 86% of its population during the German occupation. He also emphasized on the importance of expressing recognition and gratitude to the saviors of Jews. The Deputy Minister of Justice, Kostas Karagounis, emphasized the uniqueness of the Holocaust in history, while stressing the dangers of the resurgence of anti-Semitic and neo-Nazi phenomena in Europe.
Here you can read the full rescue stories

LELA KARAGIANNI
Until World War II, Lela Karagianni was a housewife who lived with her seven children in Athens.  She had no involvement in politics. In April 1941, the German Army invaded Yugoslavia and moved Southeast to Greece. The country was divided into Italian and German zones with Athens coming under the control of the Italians. During the same year, Karagianni joined an underground cell of the Greek resistance movement EDES. The cell was code- named Bouboulina and cooperated with British intelligence. Karagianni and her fellow resistance fighters falsified papers and helped smuggle people into the areas under the control of the partisans.
A number of Jews were included among the people that Karagianni rescued. In 1947, in a letter written in 1947 to Lela’s husband, Solomon Cohen described her altruism: “In the most dangerous of times, when we thought all was lost and that there was no more hope for us, we turned to Mrs. Karagianni. We were in deep despair, and this was our last resort. I will never forget the moment when she opened her door to us. This was at a time when even our closest friends avoided us. She sheltered us in her home, although she knew that she was already under heavy suspicion”.
Solomon Cohen, his wife Regina and his daughter Shelly (Cohen) Kounio, born 1932, had fled to Athens from their native Salonika at a time when Athens was still relatively safe. However, when the Germans invaded the southern part of Greece in September 1943, the Cohen family decided to disobey the orders and not to register. Instead, they went into hiding. In April 1944, they were desperately looking for a safe-house and arrived at Karagianni’s home. Karagianni hid them for some time, and then helped them find a better location.
In July 1944, Lela Karagianni was arrested by the Germans. She was executed two months later, in September 1944.
On September 13, 2011 Yad Vashem recognized Lela Karagianni as Righteous among the Nations.
GEORGIOS & POLYMNIA THEODORAKIS
Caroline Matalon was a widow who lived in Thessaloniki with her three adult daughters, Rachel, Sara and Beatrice. After the occupation of Thessaloniki by Nazi Germany, Sara and her grandfather fell ill, and Caroline took them for medical treatment to Athens, which was under Italian control and where the situation for Jews was better. Caroline’s daughter Rachel, her husband Moshe Tshernio and their two children, Meir and Caroline, remained in Thessaloniki. When the deportations from Salonika began in March 1943, they were deported to Auschwitz, where they all perished.
The other daughter, Beatrice Matalon (born 1919), joined her mother, sister and grandfather in Athens. During their stay in Athens, the Matalons became friends with George and Polymnia Theodorakis, who lived in the center of the city with their small two-year-old daughter.
In September 1943, the Germans invaded the Italian-controlled areas and the preparations for the deportation of the Jews of Athens began. Polymnia’s brother worked for the Greek Railway Company, and thus learned of the planned transports. Although Polymnia was pregnant, the couple told Beatrice to hide in their apartment, placing their lives in peril. They introduced her to their neighbors and friends as Giorgos’ relative, on a visit from Egypt. Beatrice slept on a sofa in their living room and helped with the housework. Her mother was hid in a different place, and Polymnia would bring her food regularly. One day a German officer knocked on the door. It turned out that he was looking for another apartment, but both the rescuers and Beatrice were extremely frightened by the incident. Nevertheless, Giorgos insisted that Beatrice should stay with them.
When the war ended, Beatrice stayed with her benefactors for another couple of months. She never returned to Thessaloniki. In 1948, the grandfather settled in Paris, and Beatrice and her mother joined him there. In 1956 Beatrice married a Holocaust survivor, Richard Barzilay. Despite the distance, she continued to maintain warm relations with the Theodorakis family, and the two families would visit each other. Nevertheless, for the rest of her life Beatrice was marked by the trauma of the Holocaust period. It was her stepson who encouraged her to face the terrible memories and convinced her to turn to Yad Vashem and ask to have her rescuers recognized as Righteous Among the Nations.
On 12 April 2011, Yad Vashem recognized Giorgos and Polymnia Theodorakis as Righteous among the Nations.
(Press release)