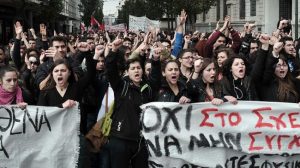 Thousands of Greek students from across the country marched through downtown Athens on March 14, outside the Education Ministry to demand the government scrap a plan that would overhaul the country’s universities that are lagging in progress and rated among the poorest in the world.
The students said they didn’t want the reforms proposed as part of the so-called Athena program. Students at the Patra Technical College (TEI) have decided to continue their sit-in at the institution until March 19, the newspaper Kathimerini reported.
The plan foresees the reduction of the number of universities and technical colleges that are producing graduates in fields that have no work as well as cutting back on admission numbers, as part of austerity measures demanded by international lenders. Under current guidelines, students can be admitted to college with grades as low as 5 out of 100 and don’t have to graduate or attend class, but some get free rooms and food and there is no tuition at Greek colleges.
For example, because of the reform, the merger will force students of Public Relations Department in Agrinio to get a diploma in Economics. Some students also might have to move to cities 200-300 kilometers from their homes to complete their studies or end up holding a different degree than what they initially planned.
The scheme has already met with opposition from angry and frustrated academics and students, given that a total of 384 faculties will be shut down: 250 in universities and 134 in technical colleges (TEI) faculties, respectively. Given the harsh austerity measures, Athens aims to cut 150,000 public sector jobs by 2015, including 25,000 before the end of this year.