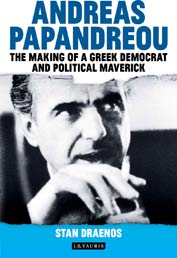 The Economist has featured on its website the biography of Andreas Papandreou by Stan Draenos, entitled Andreas Papandreou: The Making of a Greek Democrat and Political Maverick, published by I.B. Tauris, praising it as a keen analysis of modern Greek history.

Draenos’ exhaustive research and interviews that revealed every aspect of the life and career of the man who invaded the Greek political scene Greece as the first Socialist prime minister in 1981 gained high marks. Draenos, who now lives in Athens, is a political analyst, historian and consultant who served as historian at the Andreas Papandreou Foundation.

Unknown details of the life and works of Papandreou area brought to light. The book describes the transition of Papandreou from a successful political economist personality to a controversial political figure of Greece and examines his youthful years, his life in in the U.S. and his return to Greece during a turbulent period.

According to Draenos, Papandreou initially had no intention of getting involved in the political affairs of Greece, despite pressure from his father, George Papandreou. The role of Andreas’ wife Margaret, an American, shows to be significant.

His involvement in the election campaign of Democratic Presidential candidate Adlai Stevenson in 1952 sparked feelings in him that he had “put for years on ice,” Papandreou said and reinvigorated his desire to get involved in politics.

The book also shows the growing tension he felt over his ties to the U.S. and refers to when Papandreou was running for Minister for the Presidency and cut the time BBC broadcasting time in the Greek radio when the British program began attacking Archbishop Makarios of Cyprus.

Papandreou also cut the radio time of the VOA (Voice of America) and the French Broadcasting company. Then, Vincent Joyce, head of the U.S. intelligence agency (USIA) in Greece, visited Papandreou expecting to find the American so-called “Handy Andy” but was disappointed by Papandreou’s request to address him as “Sir Minister” instead of his forename. In Greece, the book will be translated and released by Psichogios Editions.

Draenos holds a PhD in Political Science from the University of York (Toronto) and his articles have appeared in numerous publications, including Historical Review, Salmagundi, Ta Nea and the Los Angeles Times.

Turkey charged on Tuesday that Greek fighter jets had “harassed” its research vessel Cesme while it sailed in the Northern Aegean.
Greece