Andrew Athens Passes Away at 91 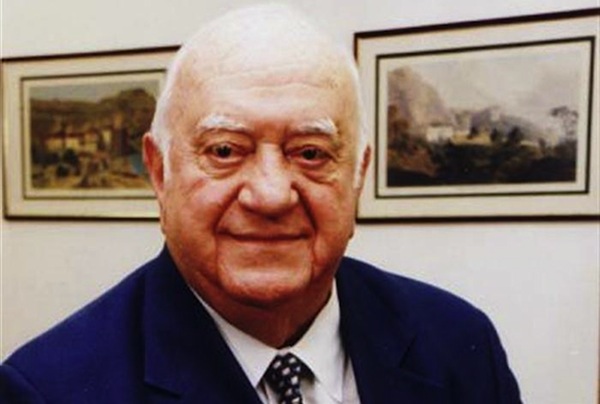 Andrew Athens, the great Greek-American Philanthropist, died on March 14th 2013. He passed away during his sleep at his Chicago home after long illness. His impact on people’s lives has been tremendous. Senator Barbara Mikulski had referred to him as a “one-man foreign aid program,” dedicated to helping others.

The Greek community in USA and people from all around the world mourned his death, including heads of States, countless political figures, and organizations.

“Brother Athens will be sorely missed by all Hellenes as his kind and benevolent charitable work touched the lives of many people around the world. His legacy will live on through the several organizations he founded and led in support of Hellenism and Orthodoxy worldwide as well as in the many individuals he inspired. We are proud to have called him a Brother Ahepan.”

“Our deepest sympathies are with the family of Andrew Athens. May his memory be eternal.”

Andrew A. Athens (Andreas Athanasoulas) was born in 1922 in Chicago, USA to immigrant parents. The name of his father was Aristides. His outstanding service to the Greek Community and the Orthodox Church placed him among the leading figures of the Greek Diaspora.

He served as President of the World Council of Hellenes Abroad (SAE) since its founding in 1995 and until December 2006 when the 6th World Assembly of SAE unanimously proclaimed him president emeritus.

Andrew Athens is an example of a man of vision, commitment and self-sacrifice that knows how to inspire and lead in struggles for the defense of the rights of the Greeks. He has approached each endeavor in his life with total commitment and hard work always tireless and lively characterized by his unwavering faith to his ideals and goals.

He was distinguished in WWII battlefronts as well as in the post-war effort for the reconstruction of Europe. As a US Army Captain he fought alongside the allied forces in Europe and the Middle East. After the war he was honored with the Bronze Star Medal and the US Army Commendation Medal, while he was commended by the Hungarian government for his contribution to the country’s rebuilding.

His successful business career was launched in 1950 with the founding of the Metron Steel Corporation, a particularly successful industry in the American Midwest that even today is one of the largest steelworks in the USA.

Athens became involved in Greek community affairs at an early age. He put his mark on all major initiatives in support of Hellenism and Orthodoxy in the United States and elsewhere. He led the efforts and successes of the Greeks abroad both under his capacity as a founding member or as a president of Greek community organizations and institutes.

He played a leading role in every struggle launched for the rights of the Greeks, for justice and peace in Greece and Cyprus, for the Ecumenical Patriarchate and other Orthodox Patriarchates and for the Greeks who are in dire need, like those living in former Soviet Union countries, Albania and elsewhere. He occupied leadership offices in roughly 50 Greek community organizations and chambers of commerce in the US, Greece, Belgium and other countries.

Immediately after the Turkish invasion of Cyprus in 1974, he played a leading role in establishing a Greek Lobby in Washington and founded the United Hellenic American Congress (UHAC), an organization with notable accomplishments and presence. In this effort he was assisted by the Washington-based National Coordinated Effort of Hellenes (CEH) he had co-founded.

He is the “Leadership 100” Endowment Fund president emeritus. Athens was its founder and first president of the board (1986-1996). He has co-founded and chaired the International Orthodox Christian Charities (IOCC). For two decades (1974-1995) he was the president of the Council of the Greek Orthodox Archdiocese of North and South America. He was the co-founder of the Hellenic American Chamber of Commerce and served as its president from 1991 to 1997.

Andrew Athens won international recognition for his service to the community. Foreign governments, Orthodox Church Patriarchates, charitable organizations and production sector representatives around the world honored him with over 42 awards, medals and distinctions.

He was the “Archon” of the Great Church of Christ, an Ecumenical Patriarchate honorary title conferred upon individuals honouring them for their service and dedication to the Church. He was also honored by other Orthodox Patriarchates and Churches for his tireless efforts defending religious freedom and human rights. He received, among others, the Medal of the Supreme Taxiarch of the Holy Sepulchre, the “Athenagoras” Human Rights Award and the Gold Cross of the Holy Cross Seminary bestowed by Archbishop Iakovos.

In May 1979, he received the Church of Cyprus St Barnabas Gold Medal in recognition of his service to the people of Cyprus.

Throughout his lifetime, Andrew Athens traveled to all continents covering a distance of millions of miles in an effort to unite and strengthen the Greek communities abroad.

In 1997, he founded Hellenicare, a Primary Health Care Initiative and humanitarian assistance project which constitutes a lifeline of hope and example of selfless service to the human being. A total of seven medical care centres, established in former Soviet countries (Georgia, Ukraine, Armenia) and Albania, offer free medical services to people of Greek and non Greek descent.

Finally, Andrew Athens was an excellent family man. He met his wife Louise during WWII. They had two children, a son and a daughter, and four grandchildren.

Andrew Athens died on March 14th 2013 at his Chicago home.