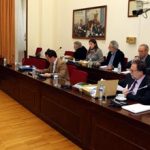 The relatives of former Finance Minister George Papaconstantinou, whose names were deleted from a list of 2,062 Greeks with $1.95 billion in secret deposits in the Geneva, Switzerland branch of HSBC that hasn’t been checked for tax evasion have refused to testify before a Parliamentary committee investigating him.
Lawyers representing Papaconstantinou’s two cousins and their husbands wrote to the committee and said that the four have already responded to questions from financial prosecutors and have nothing to add, although insisting that the money they had in the bank was fully declared as legally required. There was no information why they weren’t compelled to appear, only requested to do so.
The committee has been working for weeks, off and on, and has made almost no progress in determining who removed the names from the so-called Lagarde List, named for former French finance minister Christine Lagarde, now head of one of Greece’s international lenders, the International Monetary Fund (IMF.)
In 2010, she handed the names to Papaconstantinou, culled from a list stolen from the bank by a employee, but he said it went missing. His successor, Evangelos Venizelos, now head of the PASOK Socialists, one of the partners in Prime Minister Antonis Samaras’ uneasy coalition government, also had a copy and is not being investigated amid criticism he is being protected.