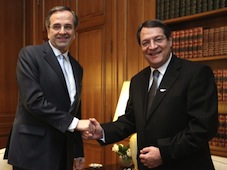 After meeting new Cypriot President Nicos Anastasiades in Athens, Greek Prime Minister Antonis Samaras has called on the European Union to support Exclusive Economic Zones (EEZs) that would protect the two countries interest in oil and gas exploration in the Aegean.
It was the Cypriot leader’s first visit abroad since being elected last month and the leaders talked about his country’s imminent bailout that looks to be similar to Greece’s, reunification talks between Greek and Turkish Cypriots who occupy the northern third of the island, and the EEZ.
Samaras said that the EU should unite behind a common policy on EEZs as both Athens and Nicosia eye future revenues from oil and natural gas. “It is Cyprus’s inalienable right to make use of its EEZ,” said Samaras. “There is a need for a common policy on EEZs because the energy reserves of member states are also the energy reserves of the EU.”
Samaras, in Ankara recently, met with his Turkish counterpart Recep Tayyip Erdogan in a bid to settle differences over the EEZ. Turkey does not recognize the Law of the Sea and Samaras has said Greece will not back down on its claims for territorial waters over which the countries are feuding.
On the Cyprus issue, Samaras said there was a new chance for a solution after Anastasiades’s victory but warned that the new administration did not have a “magic wand” and much would depend on the stance of the Turkish-Cypriot side, the newspaper Kathimerini reported.
Samaras also expressed hope that Nicosia would be able to extract the best possible terms for its EU-IMF-ECB bailout and called for coordination between Greece and Cyprus on issues related to the economic crisis. “Hellenism is being tested but will come out of this stronger, with an improved political and geostrategic role,” said Samaras.
“We are determined to take the measures that will strengthen the state and will help cooperation between the two countries,” said Anastasiades, who was also due to meet other political leaders. “Hellenism is experiencing a crisis but has been through tougher times,” he added. “The crisis is an opportunity to overcome any negatives.”