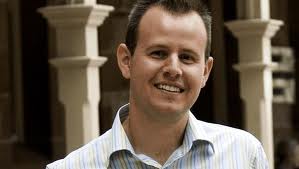 In his TEDx talk, Zakos describes the several ways conversational humanized interaction has changed our present viewpoint on the use of machines, progressively having converted from simply clicking a button to actually talking to the machines. The demo is not 100% smooth, but it does outline the potential of the software beyond what is currently available with Siri or Evi.

According to 33rdsquare, Zakos is a highly creative Greek-Australian computer scientist who believes that the essence of creativity is based on the notion that we ultimately all have the freedom and the power to create our own reality and explore it through our own thoughts. Maybe that is why he created his first artificial intelligence chat robot when he was only 14 years old. Ever since, his fresh vision for interactive, humanized computing has resulted in world-leading innovation.

A technologist with an entrepreneurial drive, his career contributions range from research to strategic business development, leading the commercialization of emerging technologies in Asia-Pacific, Europe and North America.

Zakos thrives on seeing new ideas in the research lab make it into the real world as mainstream applications that have a positive impact on society.