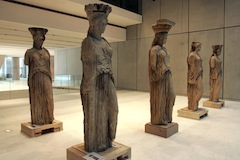 Once again, and as Greece has picked up its campaign to lure tourists back after a disappointing last year, archaeological sites and museums were closed because of a workers’ strike against more pay cuts, tax hikes and slashed pensions being imposed by the government on the orders of international lenders.
A 24-hour strike on March 8 shut down the sites across the country. The workers said they were also protesting plans to cut back the Culture Ministry’s operations although it is essential to the tourism industry, the biggest revenue-producer for the country.
Tourists who showed up at the Acropolis found the gates locked as they have been a number of times before, and it was the same at museums and other attractions where people were turned away.
In a written statement, striking employees expressed their opposition to the planned reforms which, they said, would put jobs at risk and compromise the work of the Culture Ministry. Following talks with unionists representing the workers, Alternate Culture Minister Costas Tzavaras has said that his ministry could not intervene and that the cuts would go ahead despite any protests.
Last year, images of protests, strikes and riots, which led to the closing of airports, ports, the subway, public transportation and other sites scared off tourists who headed for other countries, particularly Turkey and the government is hoping to convince them this year that it will be different although workers said more strikes are forthcoming.