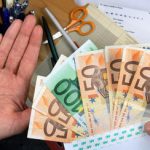 Bribe requests have fallen in Greece as harsh austerity measures imposed by the government on the orders of international lenders has limited Greeks’ ability to pay corrupt officials to do their work, according to a survey commissioned for Transparency International’s office in Athens.
The survey by Public Issue for the anti-corruption watchdog showed 8.6 percent of households received demands for bribes in 2012 compared with 10.2 percent in 2011 and 13.5 percent in 2008. Almost 70 percent of bribe demands came from the public sector. The private sector accounted for 32 percent. The cost of bribes last year was estimated at 420 million euros ($550 million) compared with 554 million euros in 2011 and 787 million euros in 2009, the survey showed.
“For the first time since the beginning of the survey, the estimated total cost of petty corruption does not exceed half a billion euros,” the watchdog said today in a statement. Cash- strapped Greeks affected by austerity measures helped reduce the amount paid, it said.
Hospitals accounted for 45 percent of bribe demands from the public sector with tax and town planning authorities each at 13.3 percent and 13 percent, respectively. Greece, which has been locked out of markets since 2010, is in a sixth year of a recession after pensions and wages were cut and taxes raised to avert the euro area’s first financial collapse.
Despite the decline in graft, Transparency International earlier this year said Greece was the most corrupt country in Europe with professionals, such as doctors, lawyers, architects and engineers asking for under-the-table cash payments and tax inspectors, license examiners and other civil  servants demanding bribes.