21 Regional Airports to be Developed 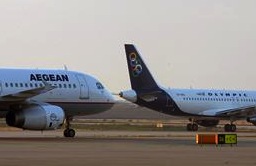 Twenty-one regional airports in Greece will be split into two groups to be conceded to private investors for a period of about 30-35 years, the government announced on March 7, without saying how much the project was expected to raise in state revenues.
As daily Kathimerini reports, the plans that Development Minister Costis Hatzidakis and state privatization fund (TAIPED) chief executive Yiannis Emiris presented on March 7, generally provide for airports on mainland Greece, the Ionian islands and Crete to comprise one group, and others on the Aegean islands to make up the other.
Group 1 will consist of Thessaloniki, Corfu, Zakynthos, Aktio, Cephalonia, Kavala and Hania airports, with an option for the investor to add those of Alexandroupoli, Araxos and Kalamata.
Group 2 will be the terminals on Rhodes, Kos, Myconos, Samos, Santorini, Skiathos and Mytilene, with the additional option of Chios, Limnos and Karpathos. Nea Anchialos Airport near Volos may be added to either of the groups. Emiris explained that it is only the operation and development of the airports that will be conceded, while the state will retain ownership and monitoring rights through the Civil Aviation Authority.
Tenders will start immediately and concession contracts will last 30 to 35 years, with an extension option. Crucially, investors will be able to utilize the area around the airports by creating commercial parks. Private investors will be expected to bring the airports up to the standard of Athens International Airport (AIA), and Emiris stated that this would entail an investment of some 200 million euros for each.
(source: ANSA)