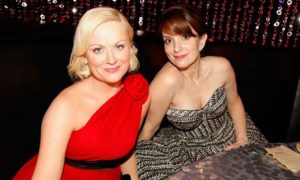 Greek-American Tina Fey and her Golden Globes co-host, Amy Poehler, were a comedic hit at this year’s awards, but are now defending themselves against a joke they made about country pop star Taylor Swift.

While audiences around the world thought Fey and Poehler did a bang-up job, Swift wasn’t too thrilled about being the subject of their routine. The young singer, who has made headlines for her numerous boyfriends, was upset about the mention of her dating life. During the telecast, Fey told Swift to “stay away from Michael J. Fox’s son,” and take “some ‘me time’ to learn about herself.” In an interview with Vanity Fair, Swift lashed back by saying, “There’s a special place in hell for women who don’t help other women.”

Poehler released a statement saying she felt bad if Swift “was upset,” but Fey has refused to give an apology. Standing ground, she responded to the remark in an interview with “Entertainment Tonight” by saying: “I did not see that one coming. It was a joke and it was a lighthearted joke. And it’s a shame that she didn’t take it in the crazy-aunt spirit in which it was intended.”

Chelsea Handler also came to Fey and Poehler’s defense, saying in an interview, “I like that [Swift] is being that vociferous about something that she thinks they were out to get her. They were clearly making a joke just about her demeanor, which is embarrassing. I mean, she’s just dated so many men.”