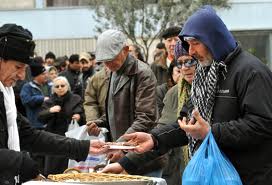 The March 7 celebration of Fat Thursday, a traditional meat-eating day, saw free meat meals  provided at the Athens Central Meat Market Varvakios for the hungry who couldn’t afford it during a crushing economic crisis that has put 27 percent of people out of work.
Despite rain, people lined up where meat sellers set up outdoor grills filled with sausages, chicken and steaks, offering free delicacies to poor people.
A concert was scheduled for the evening, organized by the Greek Music Workshop accompanied by rich delicacies offered by the Butchers Association of Varvakios Market.
Last year, more than 2,500 people went to this event to take some free food. More than 1,200 kilos (2,645 pounds) of meat were offered last year, while the municipality donated some bread and wine.
People attended the soup kitchen waited for two hours until the meats would be ready and some of them confessed that they hadn’t eaten meat for months. It was estimated that this year’s lines could be twice as long as last year.