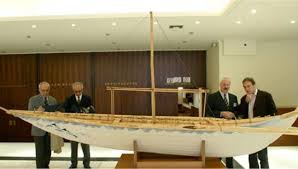 The first Minoan shipyard where big ships were constructed will be presented in a conference on Ancient Greek Technology, which will be held in Heraklion, Crete on March 21. Researcher Dr. Minas Tsikritsis and geologist Stelios Manolioudis will be the speakers.
The major shipyard was found near the Minoan palace at the location Niros Hani, Heraklion. This discovery comes to illuminate all the past information on Minoan sailing. “For the development of the Minoan shipping until now we have relied on pictorial representation showing seagoing ships with 50 oars corresponding theoretically to vessels 40 to 50 meters. This view is supported by the finding on the coast of St. Theodore near the Minoan palace of Niros Hani (Hani Kokkini), a large yard,” Tsikritsis noted.
According to the research, in the area there are carvings and bases of Minoan buildings both on land and in the sea. In the north part of the beach two large rectangular carvings were found, which are now submerged in the sea. Based on these findings, Tsikritsis maintains that “It is probably a Minoan ship construction area of about 45 meters and less than 15-25 meters.”
Archaeologist S. Marinatos was the first to speak about the Minoan shipyard.