TechNews
GreekReporter.com Greece No VAT For Shipping Through Piraeus

No VAT For Shipping Through Piraeus 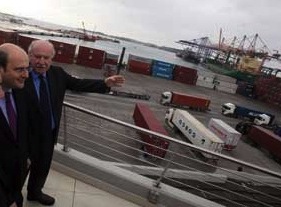 Hoping to kick start investor interest and lure more business, Greece will exempt big companies that ship products to Greece and use the port of Piraeus as a hub from its 23 percent Valued Added Tax (VAT) which is one of the highest in Europe.
The newspaper Kathimerini reported the change is in the works as the government is frantic to get more cash flow because austerity measures have backfired and led to a big drop in tax expectations despite big tax hikes that are going along with big spending cuts and slashed pensions.
A draft law amendment has already been submitted in Parliament by the Finance Ministry, favoring the distribution companies although the restaurant industry, suffering big losses because of the VAT, has asked for the same treatment ahead of the tourism season but not been granted it. VAT is applied even on some foods in Greece.
Under certain conditions will not be subject to VAT but they will be monitored up to their export to third countries, within or outside the European Union, as is also the case in France and the Netherlands. The tabling of the amendment came a day before the signing of an agreement in which the giant American computer company Hewlett Packard (HP) will make Piraeus its distribution center for products heading to other European and Middle Eastern countries.
Among the stipulations the companies must satisfy are that they are not based in Greece, that the value of imports exceeds 120 million euros ($156.9 million) a year for the first five years and 300 million euros ($392.2 million) after that, and that more than 90 percent of goods are delivered to other countries annually. The aim of the clause is to make Greece a regional transit hub for multi-national companies’ commodities, as well as a gateway for non-EU firms tying to get into the market.
HP’s investment will be immediately beneficial as Development Minister Costis Hatzidakis opened the rail link on Feb. 28 between Ikonio, near Piraeus port, and Thriasio in western Attica. The 17-kilometer long (10.5-mile) line will facilitate the transport of goods and was a condition for the implementation of the agreement between the Chinese entity, Cosco, operator of Pier II in Piraeus, and HP for the US firm to use Greece as a distribution base from which to ship its products to Eastern Europe and the Middle East.
The deal, which also involves train service operator Trainose, was to be signed on March 1. “The port of Piraeus used to be isolated, but now it is entering a new era of combined transport,” said Hatzidakis, while Merchant Marine Minister Constantinos Mousouroulis said that the rail link “will now make Piraeus port fly,” adding that it will also create new jobs.