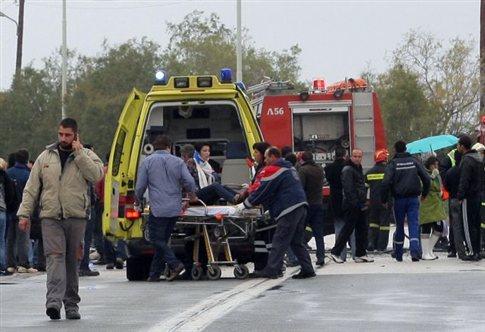 Two college students, 21 and 22, were were found dead in their apartment in Filippoupoli, Larisa, the Greek city where they went to school, and three others were reported in a coma from carbon monoxide fumes caused by an improvised brazier made from water heater scrap to keep them warm and also be used as a grill.
It was reported that the students, like many other Greeks, could not afford heating oil because the government raised the tax on fuel as part of austerity measures and the cost is prohibitive for many who have been hit with pay cuts, tax hikes and slashed pensions.
It can now cost as much as 3 euros ($3.90) per hour to heat a home and many Greeks instead are buying wood, chopping down trees, and burning construction material, scraps, furniture and whatever else they can find to keep warm as winter nears an end.
According to the doctors at the General Hospital of Larisa, the three young men were in critical condition and need further tests to determine if any brain damage was caused by lack of oxygen. One of them, whose condition was considered better was at first hospitalized in the hospital’s Pulmonary Clinic, but was transferred to the ICU with an oxygen mask. The other two are on life support.
Authorities said the five students had fired up a charcoal grill in their apartment to cook some meat and then left the fire burning in order to heat the property, the newspaper Kathimerini said. Coroner Christos Kravaritis told Skai TV that initial tests showed the students had consumed alcohol. The five men were discovered by a friend who visited the apartment and was able to open the door with the help of a landlady.
The students had set up the makeshift barbecue – made of a steel drum that had been cut in half – in the garden to cook some meat for dinner, before deciding to bring it into the house in the evening to warm the premises, police said.
A friend who visited the students’ home – after the students’ parents contacted her to express concern as their children had not been answering their cell phones – obtained the keys from the landlady after getting no response to her knocking. She found the five men passed out on the floor. Two died of CO poisoning, according to a local coroner, while the other three remained in critical condition. Two of them were in a coma and the third “semi-comatose,” doctors said.
State television quoted the landlady as saying that the students had told her recently that they had been unable to afford heating oil. Larissa TEI  suspended classes in a gesture of mourning for the tragedy while municipal staff reported receiving dozens of calls from people offering to help the bereaved families. Larissa Mayor Constantinos Tzanakoulis referred to a “barrage of calls from members of our community shattered at what had happened.”