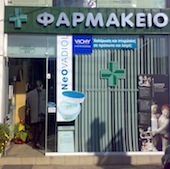 The Greek government has reacted furiously against a decision by 50 leading pharmaceutical companies to cease sending drugs to for pharmacies, although the suppliers charged the medications were being re-sold to other countries.
The cut-off has sparked a run on some pharmacies by worried customers who fear they won’t be able to get what they need, the British newspaper The Guardian reported. Pfizer, Roche, GSK and AstraZeneca are among the producers the government says have either stopped providing certain medicines to the debt-stricken country, or plan to do so.
Pfizer and Roche admit that they have done so, but GSK and AstraZeneca deny that they have reduced supplies so far. Greece’s creditors also have to wait months or years to get paid during the country’s crushing economic crisis in which tax revenues are earmarked to pay banks and international lenders putting up rescue loans to prop up the economy.
“It’s a disgrace. The government is panic-stricken and the multinationals only think about themselves,” said Dimitris Karageorgiou, Secretary of the Panhellenic Pharmaceutical Association. As the news spread, patients with prescriptions for antibiotics, statins and other medicines totaling over 200 brand names, began queuing outside pharmacies.
“I would say supplies are down by 90%,” said Karageorgiou. “The companies are ensuring that they come in dribs and drabs to avoid prosecution. Everyone is really frightened. Customers tell me they are afraid of losing access to medication altogether.” The suppliers though said that a lack of regulation has created a crisis two years in the making.
Under the current system, customers buy medicines from pharmacies, and are later reimbursed by the state, with the state setting the prices the drug stores can charge. In the wake of the country’s financial crisis, the government ordered its pharmacies to sell drugs at much lower prices, to cut down its own budget expenditure.
But as Greek prices are now 20 percent below the next-cheapest country in Europe, this has created an incentive for pharmacists to simply re-sell drugs to other countries in the EU, creating a “parallel trade.” The health ministry estimates that more than 25 percent of all drugs entering Greece are then re-exported.
Pharmaceutical companies have already lowered their prices for the Greek market, but are now saying that the re-export is starting to eat into their profits in other European countries. They also point out that as well as paying less, Greek insurance funds and hospitals owe 1.9 billion euros ($2.48 billion) to drug manufacturers and are months behind in reimbursing pharmacists, who frequently react by refusing to accept state insurance until they are paid something.
“We are insisting that the public hospitals fulfill their contracts and this is something we do in any country … We are withholding medicines until they meet their obligations,” Daniel Grotsky, a Roche spokesman told The Guardian.  The Swiss company is owed 200 millions ($262 million.) Grotsky said Roche is still supplying individual pharmacies, and only drugs where alternatives are available have been held back.
Frouzis Konstantinos, of Novartis, another drug giant, says the government needs to pay up its existing debt, and stop squeezing the profit margins of pharmacies. “The government needs to correct these wrong prices to avoid a surge of exportation,” he told the newspaper. That isn’t likely to happen because the government has cut its budget for medicines from 3.7 billion euros ($4.84 billion) to 2.44 billion euros ($3.19 billion) in 2012 and is making further cuts this year.
The government has reacted by banning exports of more than 60 drugs altogether, and says it will levy fines of between 2-20,000 euros ($2,620-$26,209) on those pharmacies that re-export illegally.