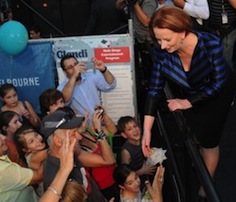 Australian Prime Minister Julia Gillard and Leader of the Opposition Tony Abbott are to attend for the second consecutive year, the Antipodes Glendi Greek Festival in Melbourne, Victoria.

“The presence of the Prime Minister and the Leader of the Opposition at the Antipodes festival for the second consecutive year, shows their appreciation towards the Diaspora and the Greek community, as well as our influence,” stated the President of the Melbourne Greek Community, Vasilis Papastergiadis.

Since 2013 is an election year in Australia, the two major political parties are as well aiming to win Greek immigrants’ vote. Apart from Gillard and Abbott, many other federal and state ministers, MPs and senators are expected to attend the official opening of the Greek festival.

Soon after the speeches that are to be given, Greek artist Michalis Hatzigiannis will perform a free outdoor concert in Lonsdale Street, the famous street which hosts the Greek Tower.

Last year at the same event, Gillard offered a two-million dollar grant for the erection of Australia’s Greek Cultural Center. This gesture was also welcomed by Abbott.