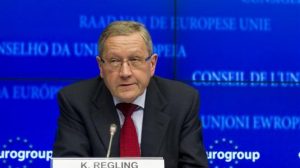 With two bailouts and three years of austerity measures failing to right Greece’s faltering economy, Klaus Regling, Chief Executive officer of the European Financial Stability Facility (EFSF) says the country will need more time before reforms work but he didn’t say how much.

In an interview with the French newspaper Le Figaro, he also said that Cyprus, which also needs a bailout, could put a dent in the Eurozone if it defaults, but that his biggest worry is that Greece will stop imposing pay cuts, tax hikes and slashed pensions on workers, pensioners and the poor. He made no mention of tax cheats who owe $70 billion.

The European Union, which along with the International Monetary Fund and European Central Bank makes up Greece’s Troika of lenders, estimates that the country will need continued support until at least 2020, when it hopes to reduce its debt-to Gross Domestic Product (GDP) ratio from 176 percent now to 124 percent.  In 2010 when Greece first applied for a rescue package, the ratio was 120%.

German Finance Minister Wolfang Schaeuble said Greece will need at least until 2022 to hit its fiscal targets, although some analysts think it will take a lot longer as the country locked itself out of the markets by imposing 74 percent losses on investor last year to write down its staggering $460 billion debt.

Regling also pointed out that a stop or a slowdown in reforms at that moment would be devastating for the Greek economy as “it’s population has already suffered a lot due to the measures being taken to balance the budget,” as he stated.

Referring to Cyprus, which faces a possible default by April if it doesn’t receive a rescue package, he said it would represent a systemic failure.  German Chancellor Angela Merkel is reluctant to okay help for Cyprus and the SPD, the German Social Democrats, have also declared the same and said Cyprus has to fight corruption and its image as a money-laundering haven, especially for the Russian Mafia.

Regling studied economics in Germany has a rich experience as a researcher in the IMF while he has worked both for the Germany government as an advisor and the European Commission as Directorate General. The EFSF is a financial tool designed by the European Commission to help countries with huge debt to avoid default by lending them money under right conditions.