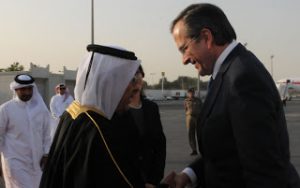 After dropping out of the running to develop the former Athens International airport site on the city’s south coast, a prime piece of land that was supposed to become the biggest green space park in Europe, Qatar is reportedly going to make a bid.
Government sources told the newspaper Kathimerini that Qatar has renewed its interest after Prime Minister Antonis Samaras’ visit to the Gulf State country last month to bring more foreign investments to Greece. Qatar had also given up on two other projects in Greece and said it didn’t want competition, only direct negotiations.
The newspaper said that officials in Doha have signed confidentiality clauses regarding the bidding project and are expected to submit their business plan along with the other parties participating in the tender by July.
They also said that that following the Emir of Qatar, Sheikh Hamad bin Khalifa Al Thani’s decision to abandon plans for the purchase of a private island in the Ionian sea, certain issues regarding the property’s construction were expected to be solved through a series of legislative measures.
Greece is under pressure to privatize and sell off or lease its assets and properties, but is set to put restrictions on proposed deals in which private interests could only lease and not own Greek entities and lands, and would have to get the approval of the military in some cases, to protect national security.