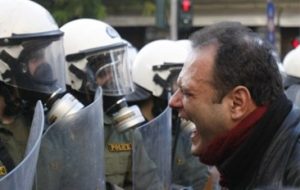 With more evidence that austerity measures demanded by international lenders in return for bailout loans have backfired and made Greece’s economy worse, President Karolos Papoulias said he fears the government’s squeezing of taxpayers will blow up in the country’s face.
“We are faced with a societal explosion if any more pressure is put on society,” he said, with a constant barrage of pay cuts, tax hikes, and slashed pensions that he nonetheless supports.
In a grim report, the Associated Press said the numbers aren’t adding up for Greece as Prime Minister Antonis Samaras’ uneasy coalition government continues to go after the same people: workers, pensioners and the poor, to foot the bill while letting tax cheats who owe $70 billion escape. Samaras said Greece has turned the corner thanks to his leadership and that all will be well.
Austerity has deepened the country’s recession, now in a sixth year, and created a record 27 percent unemployment, some 67.1 percent for those under 25, thousands of whom have given up and fled Greece for other lands.
There are 1.35 million unemployed people in a county of 11 million, while the shrinking number of workers are the main source of paying taxes – but reports said nearly one million of them aren’t being paid on time- or at all and are being forced to work without pay in the hope that one day they might get their salaries back.
The crisis has left 450,000 households with no one working, while a one-year limit on unemployment benefits — and strict rules to qualify for them — mean just 225,000 jobless Greeks are currently receiving monthly state assistance.
Maria Kanga, an unemployed mother of two, told AP that she’s worried about what she’ll do when her assistance runs out this summer. She was fired from a chain of record stores that went out of business last year. Along with more than 150 other employees, she was left unpaid for five months and then received no severance money.
Protesting outside a Eurovision Song Contest event hosted by a company co-owned by her former employer, Kanga summed up her situation: “We’ve cut back on everything … My daughter is 12 years old. She has one pair of shoes. If they get wet, there are no spares.”
She added: “Greece is not a country of bright lights and flashy events. It’s a country with people committing suicide, of those unable to feed their kids properly, or who steal from the supermarket … It’s happening to everybody. We are these people.”
According to union researchers, two-thirds of employees in the private sector no longer receive regular pay. Adding to these problems are the large increases in taxes that Greeks have to pay.
To compound the problem, Greece’s government has imposed emergency taxes on workers to help pay down its debts. Last summer, all but the lowest-paid employees were slapped with an emergency bill in additional taxes, often for several thousand euros. Meanwhile, further charges were levied on electricity bills, with households that failed to pay disconnected from the power grid. More tax hikes are taking effect.
That pressure is pushing Greece toward a tipping point at which too many demands placed on a shrinking tax base, Savas Robolis, a professor of economics and public policy at Panteion University in Athens and lead researcher at the GSEE union told AP
According to government data analyzed by the GSEE, 3.6 million people out of a population of 11 million are working, with 1.6 million employed by private-sector companies — that’s down from around 2.5 million before the crisis broke in 2010.
“Out of them, about 600,000 are left who still work an eight-hour day and are paid regularly,” Robolis says. “The remainder — a million workers — have had their hours cut or are getting paid late, four or five months late. They are in a state of desperation.”
“In other words, Greek workers and unemployed people may soon not have enough money left to pay taxes while covering their basic needs. If that happens, it would be the worst possible outcome for the Greek economy and Greek society.” That, he argues, could leave the government unable fully cover its own commitments — including wage and pension payments — causing even greater poverty.
Statistics show the high tax rate have become prohibitive and many Greeks just can’t pay them. January revenues sank 572 million euros ($766.5 million) from last year’s figure to 4.42 billion euros ($5.92 billion) despite more and higher taxes. When contacted by AP, officials the government’s powerful new Department of Public Revenue refused to confirm widespread local media reports that 2.5 million tax payers will be sent notices starting next month demanding overdue payments.
“The question is when the tax capacity is used up … Up until now, the state has fallen behind on payments to suppliers but it is able to pay wages and salaries,” Robolis said. “But if the situation gets worse I’m not certain it will be able to. If you look at other countries that went through a crisis … when then they reached a certain point and the state told them they could not pay them, that’s when the tension flared up.”