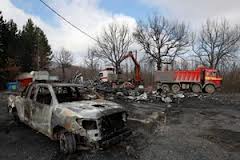 Greece’s government and major opposition party Coalition of the Radical Left (SYRIZA) are battling over blame after an arson attack on a gold mine in northern Greece that officials said could trigger fear by foreign companies to invest in the country.
A 54-year-old man has been charged in the aftermath of the fire on equipment at the Skouries mine in Halkidi, a project being developed by the Canadian company Eldorado Gold. Residents are divided between those who want the jobs it will bring and environmentalists who fear it will harm the environment and ruin tourism.
The man arrested was said to be the “moral instigator” and a local resident, while authorities said as many as 50 people may have been involved in the raid, which destroyed a number of vehicles. Two guards were also tied up and doused with a flammable liquid, police said. Four security guards were injured and a number of containers, vehicles and earth-moving machinery were destroyed.
The assailants are also alleged to have been carrying guns, which they fired into the air. A total of 33 people were detained, prompting residents of the nearby village of Ierissos to hold a public rally to protest what they saw as being random detentions by the police said.
Lazaros Toskas, a member of main leftist opposition SYRIZA’s prefectural committee in Halkidiki, was detained by police after he commented on his blog that he opposes the Halkidiki project and his alleged participation in protests opposing the mine.
A prosecutor returned his file to police, describing it as “incomplete,” according to sources, the newspaper Kathimerini said. Toskas and three of the security staff injured legal suits against each other – the staff against Toskas for allegedly being one of their attackers and Toskas against the guards for slander.
SYRIZA, which has backed opposition by local residents to the Halkidiki mining project, condemned the arson attack as “unacceptable” but expressed anger at the arrest of Toskas, referring to a “general attempt to stigmatize social struggles.” The government has accused SYRIZA of fostering political violence.
Sources told the newspaper Kathimerini that police collected evidence attack and are expecting the results of forensic tests. Officers have apparently gathered droplets of blood, a ski mask, cigarette butts, a torch and a surgical mask. Hellenic Gold, which is 95-percent owned by Canadian Eldorado Gold, insists that the mine is legal and has all the necessary environmental permits.
Public Order Minister Nikos Dendias stressed that authorities would do everything possible to protect crucial investments. “Greece is a European state of law and order,” he said. “We have a duty to safeguard the foreign investments taking place in the country. Investments are the only way we can confront the huge problem of unemployment.”
The President of Vancouver mining company Eldorado Gold condemned an attack as “violent extremism,” according to the Vancouver Times. Paul Wright said the attack on the project should set operations back no more than two weeks.
Eldorado is developing a combination open pit and underground mine that has been a focal point of environmental protest in a region that has witnessed mining protests for over a decade. Wright said it is important to separate the violence, believed to be the work of political extremists, from legal protests. While the main local issue is that the mining is to take place in a forested area, Greece has been wracked by political violence focused on the broader unrest over austerity measures.