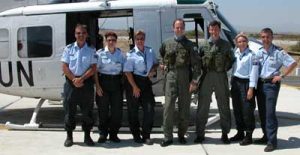 Australia has always supported the sovereignty and territorial integrity of the Republic of Cyprus and recognizes the Republic as the only legitimate authority on the island.

Australian police officers have served continually as part of the United Nations Peace-keeping Force in Cyprus (UNFICYP) since 1964, making a valuable contribution to the maintenance of peace and stability on the island.

Minister for Home Affairs and Justice Jason Clare, has recommitted to the Congress of Cypriot Organizations in Australia, to continue to support the island with its police force in order to achieve and maintain sustainable peace.

“I can assure you that the support of Australia over the UNFICYP work, still remains an important part of our agreement to the reconciliation process, for a fair and lasting solution of the Cyprus problem. The Australian police will continue to contribute to all kind of peace efforts, ” he said.

There are currently 15 Australian Federal Police officers serving with UNFICYP in Cyprus, while recently an AFP officer was selected to serve as the Senior Police Advisor for the international mission. In his message, the Australian Minister highlighted the long-term relations between Cyprus and Australia as well as the important role played by the Cypriot community over the high level of these relations.