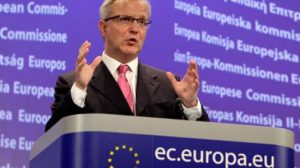 European Commission officials that its finance chief Olli Rehn’s statements concerning the minimum wage in Greece were not understood correctly. They said what he really meant was that it would be changed, although not reduced. They did not say if that means it will go up because it can’t stay the same based on what he said.

They said he meant to say that Greece will have to change it’s minimum wage in 2014 depending on the changes in labor market. A Greek official sparked an uproar when he said the minimum wage, already cut to 586 euros ($782) a month before taxes would have be cut again.

Commissioner Rehn’s statement was a reply to a Member of the European Parliament from Greece’s main opposition party, Coalition of the Radical Left (SYRIZA) MEP Nikos Chountis, who was upset with the possibility of a further cut.

According to Commissioner’s spokesman what the Commissioner said is not something new but what the Greek government signed when it signed the third Memorandum. According to that, the minimum wage will change in the first quarter of 2014 depending on the situation of the job market. Today, statistics published showed that unemployment hit an all-times record at 27% with youth unemployment at 61.7 percent.

Greek Minister of Employment Nikos Vroutsis after having a meeting with PASOK Socialist leaders, a partner in the coalition government led by Prime Minister Antonis Samars, the New Democracy Conservative chief, that that there is no intent on reducing the minimum wage or restricting the right of striking.