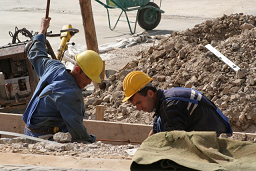 In its monthly report on employment, wages, and taxes, GSEE, the General Union of Workers in Greece, claimed poverty is rising in unprecedented levels and that the tax system is stealing from the poor to give to the rich. The union said workers and pensioners have already contributed more than they should in taxes.
The report said that from 2010-13 pensioners and workers lost 50% of their real income through a combination of factors: a lower minimum wage, eliminating collective bargaining right, raising VAT and other immediate taxes and by cuts in wages and pensions.
Pensioners and workers paid 6.5 billion euros ($8.73 billion) in 2009 or 47.9% of all direct taxes, 6.9 billion euros ($9.27 billion) or 52.6% of direct taxes in 2010 and in 2011 they paid 7.1 billion euros  ($9.54 billion) or 55.6% of direct taxes. At the same time, taxes paid by many businesses was reduced, it said. In 2009 business paid 4.7 billion euros ($6.32 billion) or 35.1%, in 2010 4.1 billion euros ($5.53 billion) or 30.7% and in 2011 only 3.6 billion euros ($4.81 billion) or 28.7% of all direct taxes.
Taxes in labor also rose significantly, with gross wages taxed at 35.6% in 2011 from 33% in 2000 while the average dropped in the EU countries. These facts resulted in significant rose of poverty, hitting the highest record ever in decades at more than 20%. GSEE condemned the new tax law as it strengthens the inequalities and cuts taxes for the highest incomes and adds taxes for the lower.
In addition to that, the biggest and most profitable sector of the Greek economy, the shipping sector, still goes untaxed. The ship owners enjoy 52 tax relief programs which are part of the Constitution although their estimated profits over the last decade were estimated at 200 billion euros ($269 billion) with only 120 million euros, ($161 million) in indirect taxes, causing the European Commission to ask if any laws are being violated.
GSEE proposed a tax system which will tax more the capital and not labor by raising the taxes on business and returns on dividends rather than on workers and pensioners. It also proposes tax breaks for children and a stepped-up campaign to crack down on tax evaders who hare largely escaped prosecution and sacrifice during the country’s crushing economic crisis.