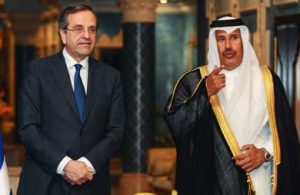 In an attempt to change Greece’s business-unfriendly reputation and seek out foreign investments, Greece Prime Minister Antonis Samaras has planned several visits abroad, including to China, Russia, and the US.
It won’t be easy to convince investors skeptical of Greece’s economic crisis, political infighting, corruption that is ranked the worst in the EU, and with the country ranked last among 38 countries in the 2013 Global Manufacturing Competitiveness Index.
Samaras said that Greece could become a bridge between the Middle East and Europe in areas such as banking and construction. “Our country offers important investment opportunities,” he said. “We experienced a dramatic crisis but it has made us wiser, more decisive and stronger.”
Samaras had a success on the first of the visits to Qatar earlier this month. The prime minister convinced the government to put up 1 billion euros for small-and-medium sized businesses. Greece will match the amount. Samaras met with his Qatari counterpart, Sheikh Hamad bin Jassim Al Thani, as well as Emir Sheikh Hamad bin Khalifa Al Thani, to soothe relations as well as lure investments.
The state-owned Qatar Investment Authority has been active in Greece since 2008, when it bought a 4 percent stake in Alpha Bank for about 300 million euros. Since then, Qatari backed potential business deals have soured. Failed projects included plans to build a liquefied natural gas plant in Astakos, to co-operate in a gold mining project in Halkidiki and to build on the site of the old international airport on Athens’ southern coast.
Kathimerini reported that the Qataris are interested in the construction and energy sectors as well as in developing regional airports and ports but a sticking point could be their insistence on direct talks instead of bidding against competitors.
“We are a serious investor and friend to Greece. The most effective way is to make a fair, direct deal. We can give fresh momentum to investments and business opportunities. We are in favour of entrepreneurship and against bureaucracy,” Hamad said.
The trip received kudos in Greece, which is in a sixth year of a deep recession despite an incoming series of 52.5 billion euros in new rescue loans from the EU-IMF-ECB Troika.
“Qatar has invested a lot of funds in Italy, France and now they see Greece as an opportunity to invest [because of the recession] and prices are low in various sectors,” John Nomikos, who heads the Athens-based Research Institute in European and American Studies, told Southeast European Times. “The Qataris know the capitalist model very well and they also know that Greece will recover from recession in the future, so their investment is going to offer them profits,” he added.
Antonis Klapsis, head of research for the Konstandinos Karamanlis Institute for Democracy, said the trip was important psychologically as well as economically. “It gives a sign to international markets and other possible investors that Greece is definitely not going to go bankrupt and that the country offers good investing opportunities,” he told SETimes.
Getting Qatar involved in the country could provide a bargaining chip to get higher prices on state properties and entities going on the block. “It is not a bad strategy to widen the potential foreign interest. It can be used to business negotiations with other possible candidates,” Aggelos Tsakanikas, head of research for the Foundation for Economic and Industrial Research in Athens, which is going to prepare a growth plan for Greece, told SETimes.
No timetable has been set for the investment plan, but Qatar is going to send a delegation to Greece next month to discuss details, and Greece plans to invite bids for some of its state companies to raise money.
(Re-used by permission of Southeast European Times, www.setimes.com)