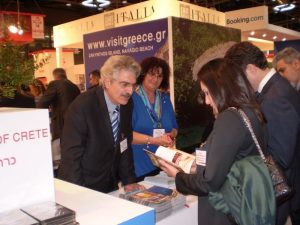 Greece featured itself at the Feb. 5 IMTM, International Mediterranean Tourism Market conference at the Tel Aviv Convention Center, including showcases from Crete, the Peloponnese and Epirus.

The Department of Tourism of Regional Unit of Chania had the responsibility for Crete’s periphery exhibition, which is also to participate in 12 Tourism Exhibitions within 2013.

For the Region of Epirus, the emphasis was given more on the promotion of alternative forms of tourism, especially on the development of cruise tourism, thanks to which Israel is a more affordable destination for the area.

The Peloponnese had its own booth as well, visited by the region’s Governor, Petros Tatoulis,, who also met with the Israeli Tourism Ministry Director General Noaz Bar Nir.

There were also some other Greek participations in the exhibition such as Rhodes, Euboea, the Municipalities of Thessaloniki, Volos and Kastoria, as well as Paros island.