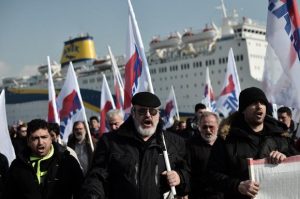 Greece’s wobbly coalition is showing further signs of strain after the PASOK Socialists and tiny Democratic Left (DIMAR) objected to plans to make it more difficult for workers to strike.
Prime Minister Antonis Samaras heads a government that is led by his New Democracy Conservatives and his Labor Minister, Yiannis Vroutsis, said he wants strikes to require the vote of a majority of union members and give management the right to lock out workers if they fail to return.
Samaras twice this year has issued civil mobilization orders forcing Metro workers and seamen to go back to their jobs under the threat of arrest or losing their jobs. He was backed by PASOK and DIMAR, but now they said he’s going too far.
“Mr. Vroutsis and other ministers who are New Democracy members need to understand that they are not promoting their party’s policies but the program of a coalition government,” said PASOK spokesperson Fofi Gennimata, according to the newspaper Kathimerini. “There has been no understanding regarding changes to the law and we are against any such discussion,” she said.
Democratic Left’s Dimitris Chatzisokratis also stressed that his party had not consented to any change in the law regarding industrial action. The main opposition party Coalition of the Radical Left (SYRIZA) condemned the government for considering changes that it labeled as being against workers’ interests.
The government is imposing more austerity measures on the order of international lenders. Those include more pay cuts and tax hikes, to which the Metro workers and seamen have objected. The ship workers also are angry they haven’t been paid in more than six months.