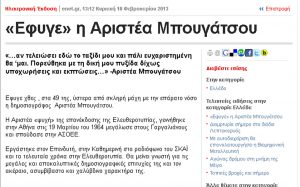 The online edition of Eleftherotypia  has reported the loss of one of its reporters, Aristea Bougatsou, who died at 49 after fighting cancer.
Bougatsou helped bring back the newspaper on Jan. 10 after it had been closed since December of 2011 when it filed for bankruptcy. It was once one of the most widely-circulated papers in the country.
She was born in Athens on March 19,, 1964, grew up in Gargalianous and studied at the Athens University of Economics and Business (AUEB).
She had worked for Ependitis and Kathimerini newspapers, at the SKY channel radio station and over the past few years, in Eleftherotypia. She was known for her journalistic abilities as well as “her utmost integrity and uncompromising character,” the newspaper wrote.