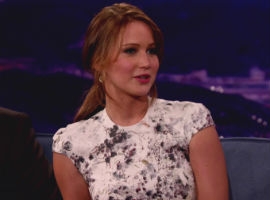 The beautiful young Lawrence, who has received accolades all awards season long for her role in “Silver Linings Playbook,” sat down with O’Brien to talk about her career and a few other things, including ogling a certain Greek-American.

When asked which celebrity “blew her mind,” Lawrence was quick to answer “John Stamos.” After attending a party with the handsome actor, the 22-year-old admitted she “turned into a pervert” when seeing him, and couldn’t stop staring at his, well, assets.

“I was, like, following him into rooms and staring at his ass. I lost my mind when I met him, and I didn’t want to meet him because it’s not good when I meet people who I really idolize. It’s just never good, and so I was avoiding him, but then my friends brought him over because my friends are jerks and I started really freaking out and he asked me if I was on mushrooms and I was like, ‘No. I’m dead sober. This is just me,'” she told O’Brien.

Lawrence said she couldn’t admit her crush when finally meeting Stamos, and just kept thinking about his Uncle Jesse character from “Full House.”

Stamos took to Twitter, noting he didn’t even realize Lawrence’s discomfort by replying to a @TeamCoco tweet with: “For the first time, I was totally oblivious.”

Check out the interview where she talks about Stamos at around the 4:45 mark: