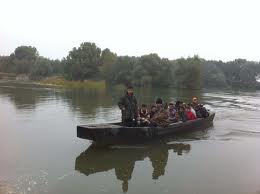 An ongoing government sweep to round up illegal immigrants, Operation Xenios Zeus, has also deterred them from trying to enter Greece across the Evros River on the Turkish border, Greek police said.
The influx in the region has been reduced significantly with police patrols as well as a new fence along the border. Based on data from arrests, the number of illegal immigrants trying to enter the area has been cut 95 percent.
Officials though said they believe immigrants may be choosing other routes, such as the many islands not far from Turkey although a number of them have died in boat capsizings.
Xenios Zeus – an ironic code name that means “hospitality” – has been underway since Aug. 2, 2012 in the area of Evros and in central parts of the city of Athens. The operation’s objectives are pushing back illegal immigrants from Evros and sealing of the borders, and deporting illegal immigrants.
The other goals, officials said, include ensuring the rule of law and protecting quality of life in Athens, to the benefit of both inhabitants and visitors of the country’s capital. In this context, the aim of the operations is to suppress illegal activities, including illegal trade, prostitution, drug trafficking, and organized crime.