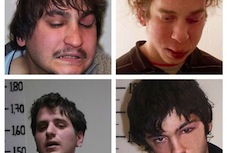 Greece’s Public Minister Nikos Dendias has disputed charges that four bank robbery and terrorism suspects were beaten in police custody, insisting their injuries were suffered during their arrests, but he admitted photos of them were doctored to remove signs of bruising.
He defended it, saying authorities needed them to be able to be recognized in pictures but promised “merciless punishment” if police were found to have abused the suspects.
Speaking to Mega TV, Dendias insisted allegations that the detainees had been tortured would be investigated. “We will not accept any breach of rights,” he said.
The suspects, two of whom have been linked to the Conspiracy of Cells of Fire terrorist group, were arrested on Feb. 1 after two armed bank robberies in Velvento, northern Greece, and a chase involving a hostage.
The major opposition Coalition of the Radical Left (SYRIZA) and Democratic Left (DIMAR) issued statements expressing concern about the possibility the alleged bank robbers had been tortured after the police released photos of the suspects which showed them with heavy bruises.
“The torture of detainees is a disgrace for the Greek state,” said SYRIZA. “It is very difficult for even the leadership at the ministry to think this is an isolated incident,” it added, referring to a recent report by the UK newspaper The Guardian about police brutality.
SYRIZA and DIMAR called for judicial authorities to investigate the matter. “Terrorism is the enemy of society and democracy must confront it decisively,” said DIMAR. “However, democracy does not exact revenge. An investigation and explanations are needed with regard to the faces that have been deformed due to beatings.”
The Public Order Ministry denied that the suspects, aged 20 to 24, had been abused, the newspaper Kathimerini reported. “If SYRIZA or anyone else has evidence regarding the torturing of detainees and not injuries to terrorists resulting from a confrontation and their resistance, they should have already submitted it to the justice system rather than just issue statements,” said the ministry.
It referred to accusations that there was a general problem in the Greek police regarding the abuse of suspects as “hair-raising and dangerous.” Police in western Macedonia also issued a statement insisting that only “necessary force” had been used to apprehend and disarm the suspects, who had allegedly carried out two armed robberies and taken a hostage.
The police also said that the alleged robbers had been armed with Kalashnikov assault rifles, a Scorpion submachine gun, handguns and a shotgun. Police issued a statement saying they have matched the fingerprints of one of the suspects with those found at two properties, one in the Athens neighborhood of Kallithea and one in Volos, central Greece, that were used as hideouts for Conspiracy of the Cells of Fire.
Two of the four men detained were the subject of arrest warrants issued in 2011. Members of Greece’s anti-terrorist squad were searching an apartment in the northern Athens suburb of Maroussi on Feb. 4. SKAI TV reported police sources saying that someone had unsuccessfully tried to break into the apartment, suggesting that members of the group may have tried to enter the property to destroy evidence.