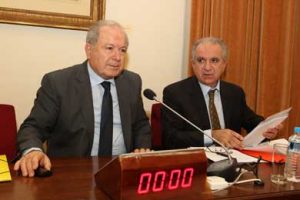 A Greek parliamentary committee probe into the handling of a list of Greeks with secret Swiss banks accounts by former finance minister George Papaconstantinou has stalled over infighting between rival political factions.
Christos Markoyiannakis, a member of the ruling New Democracy party of Prime Minister Antonis Samaras, is overseeing the 13-member panel and he has written Parliament Speaker Evangelos Meimarakis asking for regulations to be lifted so that the committee’s work can be televised instead of being kept secret, the newspaper Kathimerini reported.
The lawmakers are looking into why the names of three of Papaconstantinou’s relatives were removed from the list of 2,062 Greeks with $1.95 billion in the Geneva branch of HSBC that hasn’t been checked for possible tax evaders for more than two years. The government instead is proceeding with more big pay cuts, tax hikes and slashed pensions on workers, pensioners and the poor.
A peeved Markoyiannakis claimed in his letter that some of the Members of Parliament on the committee were displaying behavior “clearly intent on causing delays.” That came after he tangled with a member of the major opposition party Coalition of the Radical Left (SYRIZA), Zoe Constantopoulou and Independent Greeks MP Vassilis Kapernaros broke his finger after banging a desk in frustration. Markoyiannakis said he felt they were asking witnesses an excessive amount of questions without helping the investigation progress.
The former head of Papaconstantinou’s office, Chrysa Hatzi, gave evidence for several hours, continuing until about 3 a.m. into Feb. 2 as she was quizzed about the list. She told MPs that the CD containing the date arrived at the ministry early in October 2010.
She admitted that the normal process of logging the arrival of an official file was not followed. Hatzi added that she did not know which of her colleagues took the CD for safekeeping. As a result, she was asked to name all 28 employees serving in Papaconstantinou’s office so they can be questioned.
Papaconstantinou earlier said the list went missing and after current Finance Minister Yiannis Stournaras vowed to find it, Papaconstantinou’s successor as finance chief, Evangelos Venizelos, produced a copy on a memory stick.
Venizelos, now the head of the PASOK Socialists, one of Samaras’ coalition partners, didn’t check the list for tax evasion either at a time he was doubling income and property taxes but Parliament voted against investigating him, leading to charges by critics the government was trying to protect him and using Papaconstantinou as a scapegoat to settle rising public rage over tax evasion and injustice.
The so-called Lagarde List is named after former French finance minister Christine Lagarde, now head of the International Monetary Fund (IMF) once of Greece’s international lenders. She said she gave it to Papaconstantinou in 2010 and that other countries, except for Greece, were using lists of names from a CD stolen by a former bank employee to go after tax cheats. Greece has done nothing with it.