Zeus' Temple In Olympia Being Fixed 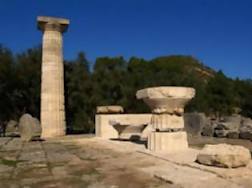 The temple of Zeus in ancient Olympia has been partially reconstructed by the German Archaeological Institute, a project officials there said is aimed at contributing to a better understanding and awareness of this valuable monument.
Those visiting the monument could have a view of the third dimension of the site after a column was replaced back to its original position in 2004. By the end of November,, 2012, the second stage of the reconstruction was finished aiming at presenting the western opisthodomos to the visitors in a greater way.
It is noteworthy that 38 architectural pieces, which have been in place since the 19th Century, have been removed. Furthermore, 12 wall ashlars were placed at the higher layer of the toichobate of the western wall of the Cella. According to Archaiologia, the jamps of the western anta were cleaned and the missing northern edge was restored by a titanium reinforcement and the use of the “in Bosse” cast artificial mixture which was finally adjusted to the ancient surface.
When the restoration is completed, it will be possible for the visitors to admire the monument in a more completed way in order to estimate better the architectural members. The restoration project started after the permission given by the Central Archaeological Council, while the Leventis Foundation was the project’s benefactor.