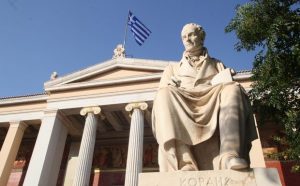 According to the Education Minister Costas Arvanitopoulos, many reforms are designed to be implemented in the sector of education within the framework of the Athena project sponsored by the government.
The minister said that education issues are of national importance and upgrading public universities is a top priority. He stated that Greece has too many universities, 40 for a country of 11 million people, and that the country needs to consolidate or merge schools to reduce costs.
According to Arvanitopoulos’ published plan, a federal university is to operate in Athens, meeting the university stereotypes of Britain and France, named Adamantios Korais, which will include the Agricultural University, Economics, Panteion and Harokopio University and the University of Piraeus.
Moreover, 12 Greek cities will no longer have any faculties within their region. The teaching staff and the employees of the departments to be merged or absorbed will be fired or displaced. The students of these departments will continue their studies until graduation, but will be transferred to the department that will absorb their own. The same thing will apply to teachers and employees.
Arvanitopoulos highlighted that the objectives of the ministry are to strengthen free public education, upgrade institutions, and show some serious interest in the young and their families’ expectations. The reforms aim at university degrees that will provide students with hopes and strong potential in the labor market, and not degrees that lead to unemployment.