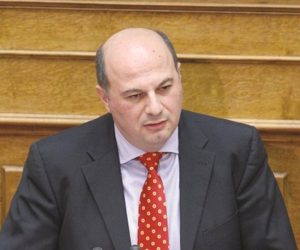 Many critical issues were raised by the Federation of Greek Communities in Germany, during the representatives’ meeting with Greek Deputy Foreign Minister Constantine Tsiaras who visited North Rhine-Westphalia state last weekend.

Among them were problems that Greek schools in Germany are dealing with, the recognition of the voting right for immigrants, the voidance of double taxation as well as the creation of a Council of Hellenes Abroad (SAE).

Tsiaras explained to the Greek news agency AMNA that, “The new SAE gives the opportunity to every overseas Greek, wherever he may be, to participate substantively in a new body of vertical representation, better organized and efficient.”  He also added that “The heart of such a large force beats here, in Germany. It is our duty to utilize it, building a two-sided relationship of credibility and confidence.”

The Vice-President of the Federation of Greek Communities in Germany, George Papadopoulos, highlighted the need to develop a national plan for Hellenism abroad, in which all the communities, Church and its role, SAE, educational policy, etc,  will be integrated. “The incoherent political choices must end here, as they only seem to cause confusion” he added.

As part of his trip, Tsiaras visited Germany’s Holy Metropolis in Bonn, where he got to talk with Germany’s Bishop Augustine on issues over the Greek diaspora in Germany.