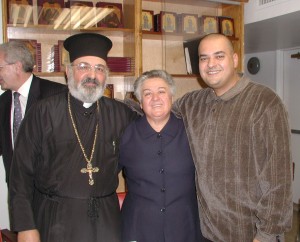 “No evil can happen to a good man, either in life or after death,” Plato. The One Year Memorial Tribute for Rev. Anastasios Diakovasilis, Presbyter Economos of St. Nicholas Greek Orthodox Church of Flushing, New York, was held on Sunday, January 20th in his church. A memorial dinner with over three hundred persons was held in Sarantakos Hall. The sentiment expressed by all was that the late priest was unique for his generation. Nor will we see anyone like him again in our lifetime. He came from the school of hard knocks. He was raised during WWII, the devastation of the Greek Civil War that no one wants to talk about and the poverty of 1950’s Greece. His refuge was religion and poetry.

“Jesus, give me faith and strength,” (“Γι’αυτό πίστη και δύναμη Χριστέ μου πάλι δώσ’ μου”), wrote Rev. Anastasios Diakovasilis in his poem, The Tomb of Christ. These words summarize the ministry of Rev. Anastasios. He knew how to inspire persons with words that reinforce a positive outlook in life. When everything is hopeless, Father Anastasios would say, “Do not listen to negative thinkers. God is great. St. Nicholas will help you.” These words inspired parishioners to overcome physical and spiritual obstacles.

“We are so very thankful to God to have had our lives blessed with our father’s wisdom, guidance and love,” said his children, Paschalis Diakovasilis, Eleni Serghiou and Presvitera Evyenia Samaras. “His gentle kind spirit has touched so many lives. His devotion, encouragement and spiritual guidance for his family, church and community will always be cherished. Our father was our friend, our idol, our protector and will forever live in our hearts.” Presvitera Maria Diakovasilis was part of this persona. She carries on his image to all of us.

Father Anastasios was born in Nysiros, a beautiful Aegean island off the coast of Asia Minor on February 29, 1936. Heroism and patriotism imprinted itself on Father Anastasios’ childhood memories. He attended Nysiros High School where his outstanding talent for singing was noticed. All these factors contributed to his decision to attend the ecclesiastical seminary in Rhodes for four years. He graduated with honors. Father Anastasios attended Richard Bland College in the United States, studying Psychology.

He donated his services to Bishop Spyridon of Rhodes. Father Anastasios began his religious education career as a teacher at the Boys Orphanage at Arenou Rhodes. In 1960, he married his wife Maria. They have three children: Eugenia Samaras, Eleni Sergiou and Paul Diakovasilis. All his students graduated from college.

In 1963, Father Anastasios and Presvitera Maria immigrated with their family to Astoria, New York. He served as a deacon at St. Demetrios Church in Astoria that was the largest community of Greek-Americans outside of Athens, Greece. On March 16, 1975, he was ordained to the priesthood by Bishop Philotheos of Meloas in St. Demetrios Church. His first assigned parish was at Hopewell, Virginia for 21/2 years. During his ministry, he was honored by the Prince George County chapter of the American Red Cross chapter. Father Anastasios was cited “for unselfishly giving of his time and energy to make a better community to all.”  His next assignment was at St. Sophia’s Cathedral in Washington D.C. for seven years.

In January 1984, Father Anastasios was appointed as Assistant Pastor to St. Nicholas Church, Flushing, New York. He served the community for over fifteen years. He was honored on numerous occasions during his ministry. On December 23, 1984 he was bestowed the title of Sakellarios and Exomologos. On Feb. 1, 1992, the P.T.A. of the Greek Language Institute of St. Nicholas Church presented him with a plaque for “his dedication, guidance and leadership to the children of our school and for the perpetuation of the ideals of Greek Orthodoxy.” On June 5, 1996, Father Tasos was recognized for “outstanding spiritual guidance, untiring efforts, and unselfish dedication to academic excellence in Hellenic Education and the beliefs of the Greek Orthodox Church. “The Franklin Center for Rehabilitation and Nursing in 1997, presented the beloved priest with a certificate of recognition “in appreciation for dedicated volunteer service to the residents.” In 2007, He was honored at a local University for promoting Modern Greek Language studies.

Congressman Gary Ackerman declared June 1st, 1999 as Father Tasos Day in the 5th Congressional District upon his retirement. “I know there are not enough words to describe Father Tasos’ dedication, guidance, leadership and untiring efforts to academic excellence in the Hellenic education and the beliefs of the Greek Orthodox Church,” he said. “I know that the parishioners and community will feel the loss of this outstanding and unforgettable person.”

Demetrios Tassopoulos said: “at a social, I began the title of Rev. Anastasios being ‘the priest of the people’.”  This phrase stuck to Father Anastasios’ all his life. Efterpi Tassopoulos recalls that when she was “sick with breast cancer he blessed me. He opened doors of Hellenic Christianity in a crystal voice that helped hurt souls and scattered sorrows.” Bill Tsadilas described him with a Greek proverb “May the soil covering you be light (connoting No evil can happen to a good man, either in life or after death).” Dora Lagos believes “he gave warmth to the sick and lonely person.” Dina Dalis expressed that “Father Tasos was the priest of all of us.” Joanne Kassaras said “he was our priest, our brother and helped us all with our children.” The late priest’s grandchildren and nephew read his poetry during the memorial luncheon.

A spokesperson from his village of Nikia, Nysiros said “our village does not have a priest now. This is a real religious crisis on our island. He gave his life to all. Father Anastasios was our benefactor. He left a vacuum that cannot be filled.”  His wife, Presvitera Maria, shared in the success of his ministry.

Four generations of my family have known Father Anastasios since his immigration to the United States in 1963. Knowing a Greek born priest, with old-fashion values, evokes memories of one’s lost youth with one’s parents or grandparents. His sympathy, compassion and positive attitude will remain with all who had the honor of knowing him