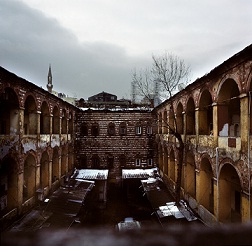 Greek photographer Athina Kazolea will present her latest photo exhibition revolving around traditional Turkish inns (Turkish word: han) and their history at the Sismanoglio Megaro in Istanbul from Jan. 23-Feb. 17.

The exhibition entitled Fragments of presence in the Hans of Istanbul features 44 works of art building on the natural environment and showing headless portraits of people, tired bodies of workers, smoking travelers’ hands and empty chairs.

Kazolea was born in Athen and has been working thee as a director for Greece’s national television network and as a freelance photographer. She studied French philosophy at the University of Athens and directing in Paris at Essec Institute. Over the past 10 years she has traveled to Ethiopia, Palestine, Turkey, Tibet, Cuba, Yemen, Israel, Morocco and India.

In 2000, she joined Doctors Without Borders as a photojournalist in missions in Palestine and Tibet. She has also worked with the Greek organizational branch of UNHCR, photographing Iraqi refugees in Damascus, Syria. Since 1990, a large number of her works have been published in many newspapers and magazines, including Passport, Kathimerini’s K, Marie Claire, Cinema, Difono, Metro, Ena, Ta Nea, and Tahidromos.