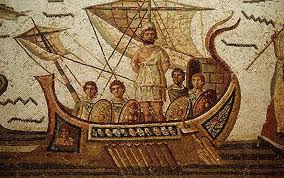 And the fascination with the Greek heroes never stops! In another yet documentary of BBC4 Simon Armitage undertakes his own Greek adventure, following in the footsteps of one of his own personal heroes, Odysseus and at the same time wondering whether he even likes the guy.

He questions Odysseus’ behavior throughout his trip back home to Ithaca, while his faithful wife Penelope is still waiting for him…only for him to fool around with all the women he meets in his journey.

Simon though doesn’t stop there. He visits Athens and specifically the port of Piraeus and talks to 2 experienced seamen, Andreas and Dimitris, who give him their version of Odysseus’ trip…”Every man in Greece has a bit of Odysseus in him..to travel, to see places and sometimes the same goes for some Greek women” the 2 men told him.

Simon’s guide in his Greek adventure is Homer himself. He reads on, only to realize that Homer gave directions on how to go to hell through the river Acheron and Odysseus was the only one who crossed that gate. Noone ever before had the chance to cross the gates of the underworld and come back alive, but Odysseus is the only one and probably the favored one.

He actually looks in detail Odysseus’ trip and how this had an effect on his psychology and how, almost after 20 years of wandering, the Gods finally grant his wish to return home.

Simon finally concludes that Odysseus’ character will always remain an intriguing one and probably one of the most fascinating and inspirational ones due to his adventures, his strong personality and his will to carry on regardless of all the obstacles…and for that we have Homer to thank for.