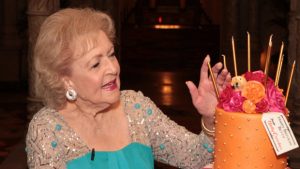 NBC is throwing an all-star bash for Betty White, who just turned 91 on Jan. 17.

In addition to the NBC celebration, White was “given” a boa constrictor from the Los Angeles Zoo and Botanical Gardens. The Lifeline Program, in which White serves as a spokeswoman, adopted the boa in her name. The actress, who is known for her love and support of animals, has asked for her birthday wish that people donate to the Morris Animal Foundation.