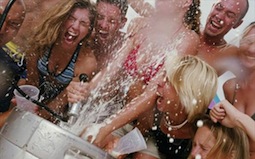 Mutilation, sexually transmitted diseases and drinking urine are some of the many things that more than 1.6 million viewers watched during the first episode of What Happens in Kavos on Channel 4, focusing on the sex lives of British tourists.

British viewers said they were disgusted at what they saw on the reality show set in the seaside village on Corfu island, which shows what happens during the summer there.

Despite strong reactions and negative comments, the amount of 1.6 million viewers was enough to make the channel’s executives to the two next episodes that may be even more shocking.

They will start with professional virgin hunters waiting at the airport to identify those tourists who seem to be more inexperienced, turning to the camera by saying “If you’re a virgin and you are to visit Kavos, you will lose your virginity within a few hours. In fact you may even lose it from the airport.”

The second episode focuses on the “three times cheaper than in London” drinks served at the resort and daily gastric lavage that doctors of the 24-hours open clinical Kavos Emergencies, are forced to perform. It also shows 19 year-old Nicky falling off the bar and breaking her pelvis as well as a York builder going to the clinic holding his severed finger. The third-and final-episode focuses on the British who work in Kavos, their sex lives and prevalent venereal disease.

Greek Tourism Minister Olga Kefaloyianni, in a letter to the English Ambassador, expressed great discontent both from the Ministry and the Greek public toward that reality show. “This is a highly offensive show for both our country and its inhabitants. Greece, Corfu and the tourist product that we offer, is far beyond that ugly picture shown.Instead, our country is a world tourist attraction, because apart from its natural beauty, it embodies universal values ​​and symbols that this show ignores in a provocative kind of way,” she stated.

She also added that, “I have requested as well from the Secretary General of the Greek National Tourism Organization (GNTO) Panos Livadas to get in contact with the corresponding office in Great Britain, so as all necessary measures are taken in order to restore Greece’s image abroad.”