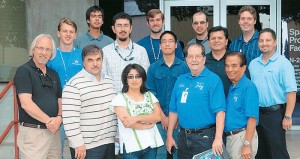 A Greek satellite is due to be launched from Cape Canaveral in the summer of 2013, with the purpose of monitoring Greek merchant ships at risk from piracy, especially off the African coast.

The Lambdasat that got its name from the Greek letter lambda, which reminds something of  the sun and sea in Greece, is the brainchild of Greek astrophysicist and professor of Aerospace Engineering at the University Of San Jose California, Pericles Papadopoulos, who hails from the Greek city of Kalamata. Papadopoulos worked with a team of ten Greek researchers to develop the satellite.

Papadopoulos stated of the satellite project: “It’s humbling how this team works. I call it the Greek minds at work.” He has turned down financial offers from those wishing to advertise on the satellite, by simply saying: “We want to advertise only Greece and not a person.”

He then explains that the satellite will cost just $100,000 to construct, and NASA will undertake the cost of delivery. The satellite will be small and the purpose now is to have further talks with the University of the Aegean for providing expertise.