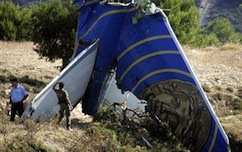 Pilots, hostesses and other employees of the civil aviation of Bulgaria protested today outside the building of the Greek embassy in Sofia on Jan. 9 asking for the reversal of a guilty finding against a Bulgarian pilot, Gianko Stoimenof, in the case of the crash of an airplane from the Cypriot company Helios in Greece in 2005 in which 121 people were killed.

The protest was organized by the Bulgarian Union of Transports. Its President, Katerina Iordanova, noted Stoimenof had been found innocent by the Cypriot courts as according to the European legislation head pilots are not among company officials responsible of the security of  flights. “We demand a fair trial for Janco, we want airlines to be safe, we want the case to be re-examined by experts in the airlines sector,” she said.

In December 2011, shortly after the end of the case in Cyprus, a trial began in a Greek magistrates court in which Chief Executive Officer Demetris Pantazis, Flight Operations Manager Giorgos Kikkides, Stoimenov and Chief Engineer Alan Irwin were charged with manslaughter. All except Irwin had been previously charged and acquitted by the Cypriot authorities. In April 2012 all were found guilty and sentenced to 10 years imprisonment and remained free on bail pending an appeal.