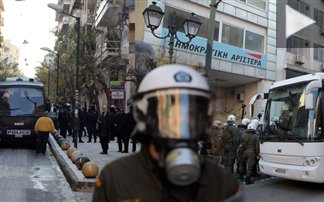 A group of about 50 protesters occupied the offices of the Democratic Left, (DIMAR) one of the Greek goverment’s coalition partners, in downtown Athens on Jan. 9 before police intervened and removed them.
The tiny party is under fire in its ranks for supporting austerity measures and was roiled further this week when party chief Fotis Kouvelis ejected two members who wanted to back a proposal to investigate PASOK Socialist chief Evangelos Venizelos – the other partner in Prime Minister Antonis Samaras’ government.
Venizelos was a former finance minister who handled the now-notorious Lagarde List of 2,062 Greeks with $1.95 billion in deposits in the Geneva, Switzerland branch of HSBC that he didn’t check for tax evaders while he was doubling income and property taxes and taxing the poor.
ProtoThema reported that Kouvelis asked police to remove the protesters, who screamed at police as they were forced out, and yelled slogans against the austerity measures that he supports and are antithetical to the party’s principles.
(Source: Capital)