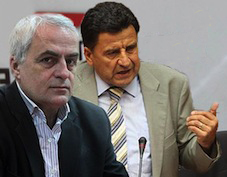 With PASOK Socialist leader Evangelos Venizelos under challenge, Greek Prime Minister Antonis Samaras is losing support from his other coalition partner, the Democratic Left, after two of its members were ejected for saying they want an investigation of Venizelos over his mishandling of a bank list that hadn’t been checked for tax evaders.
Samaras, who also heads the New Democracy Conservative party, depends on his partners to control the Parliament. Democratic Left (DIMAR) leader Fotis Kouvelis kicked out two of his party’s members, reducing its seats to 14.
Following earlier ejections from PASOK by Venizelos of those who opposed austerity measures he backed, the uneasy coalition government has fallen from 179 to 164 seats in the 300-member body.
Kouvelis kicked out Odysseas Voudouris and Paris Moutsinas because they wanted Venizelos, a former finance minister, to be included with his predecessor as finance chief, George Papaconstantinou, in an investigation over the so-called Lagarde List of 2,062 Greeks with $1.95 billion in deposits in the Geneva, Switzerland branch of HSBC.
The list is named for former French finance minister Christine Lagarde, now the head of one of Greece’s international lenders, the International Monetary Fund. She gave it to Papaconstantinou in 2010 but he said it disappeared and Venizelos produced a copy in 2012.
After Greek authorities got their hands on the original and found the names of three of Papaconstantinou’s relatives had been erased, Venizelos ejected him from PASOK and the government began a probe into Papaconstantinou.
But Venizelos has so far been exempted from questioning although he had the list in his hand for more than a year and critics said Samaras is trying to protect him to keep the government intact.
In a letter to parliamentary speaker Evangelos Meimarakis, Kouvelis said Voudouris and Moutsinas had repeatedly strayed from the party line, not just over the Lagarde list probe.
Kouvelis said DIMAR had “exhausted all possibilities” for the two lawmakers, who voted against the recent austerity package in Parliament, to remain in the party’s parliamentary group. “What is now clear is that the two MPs are not just expressing different views, they are backing a different political plan to Democratic Left’s,” said Kouvelis in his letter.
Voudouris and Moutsinas had come out in favor of a proposal by the major opposition party the Coalition of the Radical Left (SYRIZA) to include Venizelos in the investigation of the Lagarde List.
Speaking to Skai TV, Voudouris had suggested that the coalition would collapse if there was not a thorough investigation into the Lagarde list and that DIMAR should hold a congress to debate its apparent shift from its pre-election pledges. Voudouris had quit PASOK to join DIMAR last year.
Venizelos is also under siege in his party from dissidents unhappy with his handling of the Lagarde List and his unrelenting support for austerity, which has dropped the party’s support to about 6 percent in the polls.
(Source: Kathimerini)