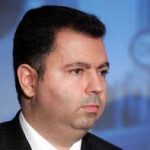 With pressure building on Athens to crack down on still-rampant corruption, the government has charged a banker whose small, private institution was found to have made as much as 700 million euros in bad loans with a criminal gang.
Lavrentis Lavrentiadis, 40, has been jailed while awaiting prosecution on charges of fraud, embezzlement, money laundering and overseeing an elaborate operation to steal from Proton Bank, in which he was the major shareholder. He faces a possible life sentence if convicted. Lavrentiadis has denied all charges and claimed he’s being made a scapegoat for the country’s crushing economic crisis.
Some analysts see Lavrentiadis’ arrest as a sign that the government is finally getting serious about going after corruption. “This shows the will of the government to end this phenomenon of corruption and they will try to set an example in this case,” Antonis Klapsis, head of research for the Konstandinos Karamanlis Institute for Democracy in Athens, told Southeast European Times.
Klapsis said that Prime Minister Antonis Samaras “wants to show people who have made so many sacrifices that it wasn’t for nothing and he’s trying to clean things up and start from ground zero.”
Lavrentiadis was taken into custody just as the government got approval of a new round of 52.5 billion euros in more rescue loans from its lenders, the Troika of the EU-IMF-ECB, which has been pushing the government to rein in corruption and tax evasion. Lavrentiadis, who built a multi-billion euro empire that collapsed in the country’s crisis, was taken briefly to a psychiatric hospital before being jailed. He has appealed for bail saying he’s too ill to remain in detention. A court ordered the seisure of assets belonging to Lavrentiadis and 29 of his former associates.
Marios Evriveadis, an assistant professor of international relations at Panteion University in Athens, said he’s not sure if the arrest proves the government will keep up a campaign against corruption. “He’s being prosecuted because the Troika wants some big time crooks [caught],” he told SETimes. “He’s not part of the hard-core elite which still have systems of protection. He’s not old money, he’s new money,” he added.
Lavrentiadis’ downfall began when shareholders who suffered major losses pressed the case against him. When police went to Lavrentiadis’ house in an affluent seaside neighbourhood to arrest him, they reportedly found he was being protected by 16 bodyguards, including six police officers, who were also apprehended and are being investigated.
The Bank of Greece and Greece’s financial prosecutor had spent more than a year probing Lavrentiadis and his associates. His name also appeared on a list of 2,059 Greeks with 1.5 billion euros in assets in a Swiss bank that hasn’t yet been checked for tax evasion.
“This is a very serious case and indicative of the inability of the Greek government to control corruption … things are changing now because there is pressure from abroad,” George Tzogopoulos, a research fellow at the Hellenic Foundation for European and Foreign Policy in Athens, told SETimes.
Costas Georgakilas, 26, an unemployed chef, said he wasn’t surprised that there was another banking scandal in Greece. “When money and power come into play, corruption follows,” he told SETimes. “But I don’t think they’re all corrupt. They get lost in the sea of corruption.”