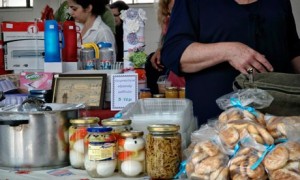 Helena Smith of the Guardian visited the market in downtown Volos. Angeliki Ioanitou has sold a decent quantity of olive oil and soap, while her friend Maria has done good business with her fresh pies.
“It’s all about exchange and solidarity, helping one another out in these very hard times. You could say a lot of us have dreams of a utopia without the euro,” stressed Ioanitou.
In the city of Volos locals have come up with a novel way of dealing with austerity by adopting their own alternative currency, known as the Tem. Last year, the Greek government stepped in with a law that supported finding creative ways to cope with the crisis. For the first time, alternative forms of entrepreneurship and local development were actively encouraged.
For users such as Ioanitou, the currency is not only an effective antidote to wage cuts and soaring taxes but the “best kind of shopping therapy”. “One Tem is the equivalent of one euro. My oil and soap came to 70 Tem and with that I bought oranges, pies, napkins, cleaning products and Christmas decorations,” said the mother-of-five.
Yiannis Grigoriou, a UK-educated sociologist among the network’s founders highlighted that: “The older generation in this country can still remember when bartering was commonplace. In villages you’d exchange milk and goat’s cheese for meat and flour.”
Panos Skotiniotis, the mayor of Volos among others, said that “We are all for supporting alternatives that help alleviate the crisis’s economic and social consequences. It will never replace the euro, but it is really helping weaker members of our society.”
(Source: Guardian)